Surface plasmons are clouds of electrons that resonate at a certain frequency. They are created by incoming light striking a compatible surface, such as the gold foil used in the Biacore® chip. The light is directed through a prism to the surface of the foil at a fixed angle that is consistent with Total Internal Reflection. (NB: Biacore® instruments use the “Kretschman configuration” for Surface Plasmon Resonance (SPR), which places the prism very close to the foil when the chip is mounted in the instrument). In Biacore® instruments, the wavelength is 760 nm, in the near IR range, and is generated by an LED. The light is reflected back from the foil through the prism and is detected by a very sensitive diode array that can measure differences in the angle of reflection of 1/10,000th of a degree, or even less.

At the point at which it hits the surface of the gold foil, the light creates an evanescent wave that interacts with the valence electrons of the gold at the opposite surface, creating clouds of these electrons that resonate in concert with the energy of the incoming light. The strength of this evanescent wave decays exponentially with distance. Nevertheless, any changes that occur as a result of the wave’s interaction with the foil includes the adjacent gold layer and the solution on the opposite side, and can be measured accurately up to 150 nm beyond the point of reflection. Proteins, antibodies, or other molecules can bind to the foil surface well within this distance (< 0.15 microns). For example, the dextran chains linked to the Biacore® CM5 chip surface are ~100 nm in length, and they are fully accessible over most of their lengths to be coupled to ligand because the gel-like environment they create (~2% hydrogel) is very porous.

The energy absorbed by the electrons is lost from the reflected light and appears as a small decrease in intensity (a faint “shadow”) at the point of reflection. The position of this “shadow” is very accurately detected by the diodes. If the refractive index of the solution applied to the gold surface changes, for example as an antigen binds to its antibody on the foil surface, the resonance frequency of the surface plasmons changes; as a result the position of this shadow changes. This is recorded as a function of time, in seconds.

In doing a study, running buffer alone establishes the position of the shadow under conditions in which the refractive index is constant. When the analyte (e.g., an antigen) is introduced, two things happen: there is a change in refractive index due to buffer mismatch, and a secondary, much smaller change due to binding of analyte to ligand (e.g., its antibody, covalently coupled) on the surface. The first is corrected for by running controls; the second is measured as the shadow moves as a function of time to positions further from the corrected original position.

The binding of 1 pg of material to the chip surface in the microhydraulic chamber gives a change in the position of the shadow that causes 1/10000th of a degree of shift in the angle of reflection, and this is read out as 1 Response Unit, or RU. Typical changes are 5-100 RU, due to binding of 5-100 pg of material, and 0.5-10/1,000ths of a degree caused by changes in the shadow’s position. Thus, the instrument reads the movement of the shadow in real time as binding occurs; it also reads the movement of the shadow back to its original position during the dissociation phase. Repeated studies with different concentrations of analyte therefore provide a series of association and dissociation curves that can be used to determine the kinetic and binding constants for the binding reaction under study.

Such changes are largely independent of the chemistry of the molecules involved. Thus, anything introduced into the medium that binds to the sensor’s metallic surface can alter the SPR signal. A major advantage of SPR is therefore that it can be used to detect a wide range of molecules, including proteins and peptides, carbohydrates, and nucleic acids, without the need to introduce labels of any type. 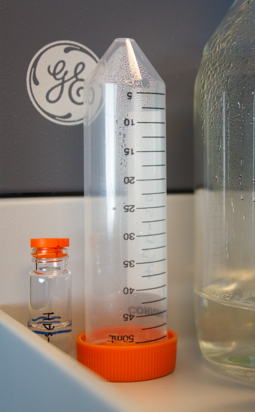