Assays for binding must allow determination of non-specific vs specific binding. In our studies of protein-protein or antibody-antigen binding, we have used several controls to assess specificity and to correct for non-specific binding. In one experiment (panel A), we routinely compare the ability of the protein in question (in this case, a specific mouse monoclonal antibody) to an irrelevant but similar protein (in this case, mouse IgG) in their ability to bind their antigen. With BiaSimulation software from GE Healthcare, we can subtract the irrelevant from the relevant curves, to obtain specific binding (A, green curve), which in this case is ~60 RU. A parallel experiment in which only buffer, not the antigen, is introduced as analyte shows no significant difference (~3 RU; A, pink curve). This indicates that the antigen used as analyte binds specifically to the antibody in question and not to antibodies in general. 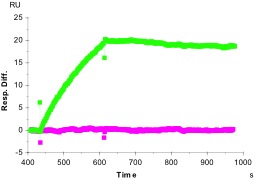 We also determine specificity by using an irrelevant antigen as analyte. In panel B, we show an experiment in which we captured the same antibodies on the chip as in A, but then instead of flowing over a solution of the antigen as analyte, we used another protein, with similar properties but different antigenicity. Note the difference in the vertical scales between A and B. In this case, flowing either the irrelevant antigen or buffer solution alone over the same chip surfaces gives no specific signal. This shows that the antibody binds specifically to its antigen and not to similar but distinct proteins. 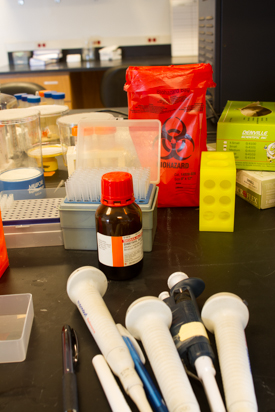